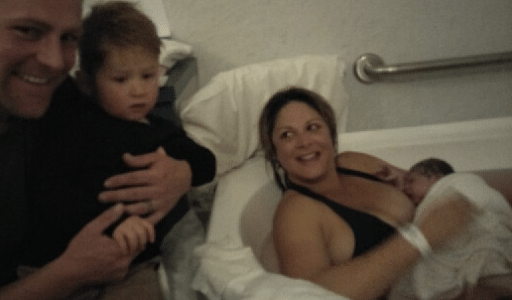 I had a Stretch and sweep Friday afternoon. I was 2cm dilated and “soft” but not completely effaced yet. This was the only VE/medical intervention I had the entire process. Which I requested based on it working quickly for me last time and really wanted baby that weekend to fit in nicely with Rick’s uni and accommodation issues.

Big walk Saturday and Sunday. Nothing really happening except slowly losing some of the mucus plug. Sunday from 12-3pm I was bouncing on gym ball and did some Kerb walking in city park.

Niggling started not long after and consistent contractions had started by 6pm. About 6 minutes apart and lasting about 45 seconds. We had dinner, I put Bodhi to bed knowing It may be my last chance for a few nights at least, and Rick and I went to bed not long after. I managed to get a few hours sleep before I couldn’t anymore so i go up and started using gym ball between contractions to try get things moving faster.

We would have liked to have laboured mostly at home like I did with Bodhi but knowing that we would most likely need to wake Bodhi up, we didn’t want to ride it out too long and it be a huge rush and stressful time waking him and getting to hospital. So at 11:30 I woke rick up and said we would probably need to be going in an hours time.

We called the hospital and let them know and asked if we could have the birth centre room, which was available. Yay! The room is nearly identical to what we had Bodhi in, with minimal medical equipment, a big double bed and a big bath.

Bodhi woke up himself about half an hour later so we decided to go to hospital then.

Contractions were about 3.5 minutes apart and lasting 1 minute.

We got to hospital at 12:30am and Bodhi was so excited to go to the hospital and was so well behaved and funny when chatting to our initial midwife Sal who got us settled into the birth centre room. He told Sal the baby was a boy named Jimmy so from then on Sal called the baby jimmy.

Bodhi helped check temperatures and oxygen levels and inspected the room thoroughly for us. When he wasn’t chatting or getting involved he sat and watched a movie on his iPad.

Sal called our midwife Sharee to come in at about 3. The midwife program we went through meant we had 2, but since we joined so late most of my appointments were with Samara. I had only met Sharee once and Rick hadn’t met her at all. So I was slightly disappointed that it wasn’t Samara but within about 1 minute of Sheree being there I was so pleased it was her and so was Rick. She was perfect for us. She came into the room and transformed it in about 3 minutes so it was perfect for any situation for my contractions or birth. She was in control and so calm, gentle and encouraging. She welcomed and involved Bodhi straight away. When we thanked her so much she said she was just the cheerleader and that Rick and I did it all and we were a beautiful family.

Rick was incredible. I never once felt alone or like I needed him and he wasn’t there, yet Bodhi was happy, fed, entertained and loved the entire time too. Even during the really intense pushes in the bath, he juggled the two of us perfectly and I feel so lucky to have him.

The first 4 hours in hospital flew by. I was on my feet most of the labour but was getting quite tired and decided to lie down for a few minutes, at which point Bodhi climbed up and gave me a cuddle and a pat and said “don’t give up Mum!”.

He was very protective of me and so sweet. He said so many other beautiful things that I can’t remember now. He kept asking if the baby was out yet, like kids on a road trip.

There were quite a few long and very intense contractions by about 4:45 so we decided to fill the bath. Omg it was amazing! Instant relief and everything stopped for over 5 minutes, which concerned me as I wanted to get the show on the road but I was so relaxed and comfortable and could have slept for days! Another few contractions came through but I had a lot of relief in between, floating in the bath.

My waters broke in the bath and then it was time to push! Although pushing time wasn’t that much longer than it was with Bodhi, it felt like a lifetime. There were at least 8 huge pushes where Benji’s Head would be coming down and it felt like his head was about to come out and then he would go back up again. This part was HARD! I had decided then and there that this was definitely last baby haha, but I knew I was about to meet my baby and had to keep going. At one point the baby’s heart rate was dropping, which worried me and gave me the strength to push way harder than I wanted To. Eventually the head was crowning properly and everyone could see all of his hair. I wanted to be on my back this time so I could catch baby myself. I don’t remember the burning ring of fire with Bodhi but I Definitely had it with Benji.

Most of his birth was very calm but I don’t know how those incredible mums do the pushing silently!?! I certainly was not silent and Bodhi started getting a bit upset saying “no Mum, stop, stop!” I felt so bad that I couldn’t control the sounds I made. We asked Sal to take him until the baby was out.

It was about another 5 minutes of pushing and Benji’s head and body all came out in one final, huge push at 5:34am Monday 23 April.

Bodhi wasn’t there to see the baby come out which he would have loved but he was there seconds later and was so amazed. When we saw that the baby was a boy Bodhi was adamant his name was Jimmy and was saying how beautiful and amazing his baby brother was.

I wanted to birth the placenta naturally but after about 40 minutes of really bad pain and Benji being quite unsettled I asked for the injection.

Rick and Bodhi had some cuddles with Benji while I got up into the bed. I then had amazing cuddles and breastfeeding for a couple of hours while Bodhi and Rick got breakfast and packed everything up and got ready to go home.

Bodhi fell asleep in a wheelchair while taking things to the car so Rick had a nice, peaceful cuddle with Benji while I had a shower and got ready, then we were out of there by 9:30!

I was very faint and very sore, but excited to get home, especially for Bodhi who was awake from 12:30 to 8:30, and only started getting worked up not long before he went to sleep. We couldn’t have asked for him to be better during the whole experience. Luckily he transferred to the car and home and we all had a few hours sleep as a family of 4 in our Tassie home.

The 3 names on our list for a boy were Jimmy, Arlo and Benji. We knew straight away that Jimmy wasn’t right (much to Bodhi’s disappointment), but we really couldn’t decide between the other 2. So we asked Bodhi which one and he said Benji and that was that. I was feeling worried about his name, not being 100% on it like i was with Bodhi, but when Bodhi told us he wanted to read Benji a book in the afternoon and said “Benji” after every line, my heart melted and I knew it was perfect.

Bodhi has been the most loving and sweet big brother already. He says how beautiful and amazing the baby is. Benji cried and I put him on the boob and Bodhi said “thank you for giving my brother milk mum”. He has sung him songs, given him gentle kisses and said “don’t cry Benji your brother is here” and so many other beautiful things.